Step Down & Expiration of Solar ITC 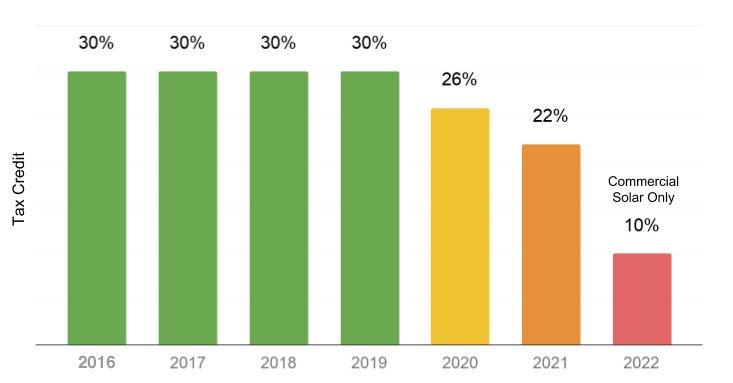 The Investment Tax Credit (ITC), first enacted as part of the Energy Policy Act of 2005 to incentivize development of renewables, has helped jumpstart the US solar industry by giving customers a 30% Federal tax credit for investments in solar and wind generation systems. However, at the end of 2019 this tax break will expire and significantly drop in the next few years – to 26% in 2020, 22% in 2021 and then completely expire for residential projects and stay at 10% for commercial and utility projects indefinitely. That is, unless the tax credit is extended again.

Going forward, a tax policy that provides continued stability and investment opportunity for solar is critical.

Both Republican and Democratic leaders have indicated their resolve to finding solutions to our nation’s infrastructure and climate changes, and solar is definitely part of the answer. Going forward, a tax policy that provides continued stability and investment opportunity for solar is critical.

The energy market is no stranger to subsidies, and fossil fuel companies, who have reaped the benefits far longer than solar, still receive direct spending breaks, regulatory subsidies and tax deductions with no expiration dates. At the same time, various credits for alternative energy sources have eventually met their end or were put on schedule.

There are different views on the subject among the solar industry professionals: some folks believe the solar tax credits should be extended because oil, gas and nuclear power producers haven’t given up any of their subsidies, even though they don’t need them anymore; others think that although the ITC has been pivotal in putting utility solar output years ahead of where it would be without the tax credit, the renewables ITC doesn’t need to be reinstated for much longer.

The solar industry would still be able to maintain its market share if the ITC were to expire today.

The ITC has been renewed multiple times, as it’s still a deciding factor for many solar sales. Of course, there would still be people that would go solar without the 30% tax credit, but there’s no doubt that the solar market would grow at a faster rate if the tax credit were extended or if the step-down glide path was elongated. Currently, the fate of ITC is in the hands of the legislators, and we believe the potential campaigns to re-enact the ITC might happen closer to the fall election season.

However, we think that the solar industry would still be able to maintain its market share if the ITC were to expire today. The rapid technology improvements and efficient installation techniques continue to drive the overall cost of solar down and interested customers can still install systems at a lower lifetime cost without the tax credit than remaining with a non-renewable energy source.

As we prepare for the ITC ramp down, we at Day One Solar remain committed to our low overhead, zero-debt business structure and strengthening of the company’s core values and services: procurement of American-made equipment, in-house engineering, advanced installation technologies, and upkeep and maintenance of solar systems and arrays for our residential and commercial customers.

Manage Cookie Consent
To provide the best experiences, we use technologies like cookies to store and/or access device information. Consenting to these technologies will allow us to process data such as browsing behavior or unique IDs on this site. Not consenting or withdrawing consent, may adversely affect certain features and functions.
Manage options Manage services Manage vendors Read more about these purposes
View preferences
{title} {title} {title}